The Aam Aadami Party – the beginning of a new era in Indian democracy, feels Ganesha

Lead by the inimitable Arvind Kejriwal and the likes of Pankaj Gupta and Krishna Kant Seveda from the front, the Aam Aadmi Party (AAP), a political party, represents a part of the India Against Corruption (IAC) campaign and promises to revolutionise the existing political scenario in India by giving strength to the aam aadami, the common man. While this sure is a welcome move, as this newly launched party vouches to take up issues directly affecting the ordinary people, that too without falling into the traps of nepotism and sectarianism, there is still a long way to go for AAP to prove itself and to ensure that it does not end up being just a group of naysayers.The AAP has managed to garner a good amount of support already. But, will the planetary alignments too support these visionaries? Will the AAP be able to stand its ground in the Indian political system? The expert astrologers at GaneshaSpeaks.com employ the principles of Vedic astrology to examine the planetary positions on November 26, 2012, when AAP was formally launched, and find out whether this ambitious initiative will go on to bring a new tomorrow for India. Read on! 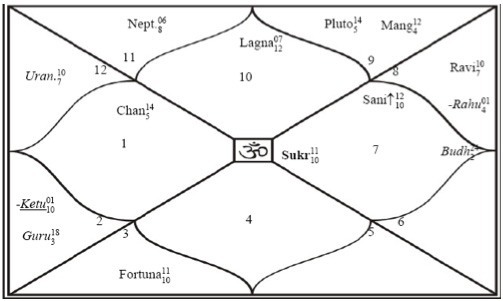 Anti-graft activist Arvind Kejriwal’s party was named Aam Aadmi Party and constitution was adopted on 24th November 2012. The political party was formally launched in New Delhi on 26th November 2012. On the day of institution, 24th November 2012, Moon was in Revati Nakshatra ruled by Mercury. It was afflicted severely in the Navmansa, and Mercury was retrograde. So, the planetary configuration at the time of name announcement looks quite complex. It indicates lack of clarity on the movement’s direction and motives, and also indicates at the confusions regarding the structure of new party. Thus, it may be surmised that the newly formed party may take some amount of time to settle down, especially as a national level political party. All decisions taken now may take a new, maybe a different, shape in future.

However, the planetary configuration on official launch date i.e. 26th November 2012 looks better. Moon was placed in the Bharani Nakshatra and the Lord Venus is strong in its own sign. More importantly, there are four planets in movable sign in Kendra. It indicates the the “ACTIVE TEMPERAMENT” of Party. This also stands for energy, activity, ardour and enthusiasm. It may be surmised from this that AAP will be surely a party of action.

The biggest advantage and drawback, however, is that there will always be a sense of dissatisfaction in the party cadre. Dissatisfaction may even grow further, developing into an urge for getting bigger and better. It will be therefore very important for Kejriwal to lead the party with concrete policies, vision and discipline backed by prominent actions.

The Capricorn rising shows the steadfastness and perseverance, which will compliment party’s challenging agenda very well. An exalted Saturn in the 10th House with a strong Venus shows the powerful and constant commitment for justice and unrelenting fight for “Swaraj”. The retrograde Mercury with strong Saturn-Venus indicates that the AAP will attract the youth, maybe by using new and appealing tactics, and also through the use of effective media, internet and modern technologies of communications. The conjunction of powerful Ascendant Lord and the 10th House Lord will also grant good results.

The 7th House Lord Moon is in the 4th House. This indicates that the Party will reach out to public with an emotional appeal. Mars is placed in the 12th House. So, it’s likely that AAP shall not form alliances with others. The Sun is hemmed in between malefic planets, while Mercury is retrograde. So, there will be attempts to break or defame AAP party members. Also, differences and disputes between important party members may surface, and party shall also face problems from influential political class and authorities.

Overall, the party shall be able to taste some success during the Delhi Assembly elections. The period between October 2014 and January 2016 will be decisive for AAP during which the party will find new shape and structure. Of course, the AAP will have to do much more to emerge as a viable national party. Nevertheless, AAP will surely open an alternative political gate for the people of India, and it will strengthen the democratic fabric of India.