The future of Karunanidhi’s government 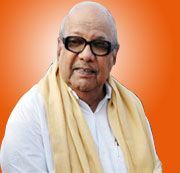 Introduction: Born in Thirukkuvalai near Tiruvarur, M Karunanidhi, has been a key figure in Tamil Nadu politics for nearly five decades. Karunanidhi was elected to the Tamil Nadu state Legislative Assembly for the first time in the 1957 elections from the Kulithalai constituency. Since then there has been no looking back for this politician. He holds the record of winning every election that he fought during his political career and has held the post of the Chief Minister of TamilNadu for five times. In the light of this, GaneshaSpeaks analyses the oath chart of the DMK government.Oath chart of DMK Government

Astro pointsThe present Government in Tamilnadu is a coalition government led by DMK leader Dr. Muthuvel Karunanidhi. It was formed in Chennai on May 13, 2006 at 10:55. Cancer 11deg Saturn 11 cancer retro Jupiter in Libra with moon in Vishaka Jupiter in Swati. Yoga is Variyan. Yogi is Jupiter, Ava yogi is Sun, duplicate yogi Saturn, Dagdha rashis None. At present Jupiter Major and Sub period of Moon, Sukshma of Rahu Mars is running. Astro-AnalysisM Karunanidhi who took oath as the CM for the 5th time, was born on June 03, 1924 at 10:40 a.m in Thirukuvalai, Thiruvarur as Mr. Daksinamurthy. In M. Karunanidhi’s natal chart Jupiter and Saturn are retrograde. Jupiter is debilitated and Saturn, Mercury and Ketu occupy Scorpio (10th house) of Navamsh chart. Moon is weak. Sun and Mars are powerful in Shadbala. Yogi is Rahu, Ava yogi is Venus, Dagdha rashis are Libra and Capricorn. At present, Venus Major Venus sub Jupiter Ketu Sukshma will operate in October/November 2008.Ganesha notes that in M. Karunanidhi’s chart two powerful planets Mars and Saturn blessed him with a special charm. The way he acts is quite paradoxical. He is a good team leader and uses oratorical skills to remain in touch with masses. However, he is considered as curt, inflexible and inventive by his close associates. He does not like competition and prefers authoritarian methods due to the exalted Mars in the seventh house, says Ganesha.He was considered a visionary and a poet, and wrote Lyrics and script when he was fired with enthusiasm at a young age. He express his opinion with a lot of charm to hide his short comings. Karunanidhi is a politician par excellence. Ganesha says Mercury made him quick-witted. Mercury signifies nervousness and “over-intellectualization”, which are detrimental as people may think that he lacks instinct, spontaneity, sensitivity etc. His communication skills and his approach to people made him a leader and the center of power. He is famous for using raw humour to hide personal feelings against opponents.Ganesha feels exalted Saturn gave him aura and an indefinable charm in the eyes of people. He has the ability to feel and to foresee, which is absent in others.Ganesha notes that in some cases he is very opinionated and determined while dealing with political opponents. However, his intolerance and prejudices may offend a common man. Ganesha notes negative Jupiter and Yogi Rahu, signify pride, pursuit of material pleasure, hunger for power at all costs, exaggeration and inappropriate self-confidence. All these may lead him to failure.Transit of Rahu makes him confused or unclear about the happenings of the world. Karunanidhi may face difficulty in ascertaining the facts and illusions because of his inclinations and attachment to family, says Ganesha.Ganesha notes Saturn’s sojourn on Ascendant and Rahu. This signifies that Karunanidhi has become more vulnerable, easily hurt because of the acute perception of events and may sink into gloomy day dreaming and dark melancholy.Future of Karunanidhi Government -predictions for 6 months (up to March 2009).
The time for oath taking has been carefully chosen to help Karunanidhi maintain his grip over the state. However, this chart resembles Jayalalitha’s chart.Ganesha notes eclipse in January 2009 and planetary combinations in Capricorn and Ketu transit in Cancer on

Ascendant of Karunanidhi and Oath chart. From October, Karunanidhi will face many challenges in personal and professional life. A sudden and decisive change of TamilNadu government is envisaged by Ganesha. Sun sets on DMK and transfer of power is indicated as Kalaignar Muthuvel Karunanidhi will bid adieu to the world stage due to health reasons. His son may not become a CM as too many aspirants for the post of CM will spoil M K Stalin’s chance and problem of plenty is indicated. An outsider can bring a coup d’tat and form a coalition government with the help of former CM Kum. Jayalalitha, for some time.Ganesha Speaks team wishes Dr. M Karunanidhi and the people of Tamil Nadu health, happiness and peace.Ganesha’s grace,Krishna Kumar A VThe GaneshaSpeaks Team