AIADMK’s vote share likely to shrink, while DMK may score well in a gruelling contest

AIADMK’s vote share likely to shrink, while DMK may score well in a gruelling contest 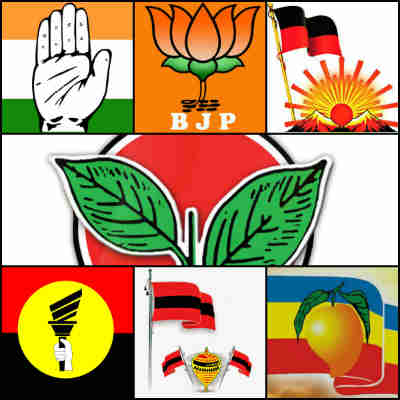 The ruling party is passing through the Saturn Mahadasha and Saturn Bhukti. Saturn is retrograde in the 6th House (house of competition, rivals and contests). Also, the transiting Saturn is not favourably aligned. Hence, a down-slide in support is foreseen. Multi party contest will cause problems and dent the party’s overall prospects. As a result their Vote Share in these elections may shrink. However, the transiting Jupiter is moving favourably. Hence, the traditional voters of the party will remain faithful to the party and it will help to win number of seats. But considering the broader picture,  Ganesha feels that it will be very difficult for AIADMK and Jayalalithaa to maintain their hold over the Tamil Nadu electorate.

The transiting Jupiter is passing through the 10th House (House of success, power and fame) of DMK’s foundation chart. So, Ganesha foresees a considerable increase in the  party’s vote share in these elections. The party will expand its voter base and is expected to do well. A strong performance from DMK is foreseen in these Assembly polls. But, the party is passing through the Venus Mahadasha and Rahu Bhukti. And, the transiting Rahu is moving over the natal Saturn which might affect the party’s prospects. Ganesha feels that this is the party that will pose the biggest threat to the incumbent AIADMK.

The transiting Jupiter in Leo, in conjunction with Rahu will not allow the party to regain its lost ground. However, the transiting Jupiter will be aspecting the natal Sun which may help them to an extent. The party may win some important seats but its vote share may not increase much during the forthcoming Assembly elections.

Rahu in Leo will be affecting BJP in many ways. BJP’s performance may not enthuse its supporters during this election. Though the transiting Jupiter indicates that the party may perfom well on some pockets but it will be difficult for the party to win seats.

On the polling date the transiting Moon will be passing through the Leo sign in Uttaraphalguni Nakshatra with Rahu and Jupiter.  It indicates highly unpredictable election results. It will be extremely difficult for all the parties to judge voters in this election.

On the counting date the transiting Moon will be passing through the Libra sign in Chitra Nakshatra which indicates fierce competition between the rival parties. AIADMK will be struggling to retain its seats and power. There will be stiff decline in its vote share. DMK’s support is likely to rise significantly and as a result, party will gain the vote share. BJP may not be able to retain its vote share. Congress party’s performance may improve but there will not be many major gains for the party.  The result of the assembly polls will largely depend on alliances and the performances of the small parties across the state.