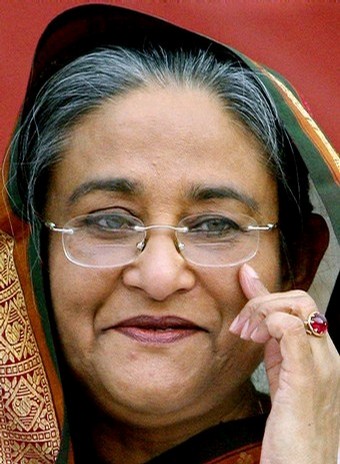 Sheikh Hasina, the eldest child of the first President of Bangladesh, recently took charge as the Prime Minister of Bangladesh, for the second time, following her victory with a remarkable majority in the last month’s general elections. Lord Ganesha meticulously studies her stars and predicts her tenure in the PM’s chair.

She has Sun, Neptune and Venus in Virgo, which makes her a powerful activist and expert in her game plan. The Sun is exalted in the Navmansa, which is favorable for those in political field. She has Atmakaraka, Saturn, that becomes powerful in Navmansa by being in it’s own sign which is a boon for any politician. So, she has got perseverance and discipline. Saturn in Cancer with Pluto and argumentative Mars in watery sign, endows her with a strong need for recognition and importance and also makes her adventurous. She has Moon and Saturn in exchange and also Mercury and Venus in exchange that makes her chart strong. So the whole planetary configuration makes her powerful as a political leader.

The chart for her newly formed Government has Ketu in the Ascendant and Moon in Bharani Nakshatra and is placed in the sign Virgo in Navmansa Ascendant. The Lord of the 10th house Mars is combust in the 6th house with Pluto. Sun is debilitated in the Navmansa chart. So the chart is not favorable and thus, she may remain under stress. The Saturn in the 2nd house opposing Uranus is indicating severe economic issues due to the shortages of resources. Neptune and Rahu in the 7th house suggests a lack of commitment and consistency with regards to foreign policies.  It won’t be an easy first year for her as pressure may start mounting from May 2009 due to adverse transit of Ketu. The period from October 06, 2009, looks extremely challenging when transiting Mars would be moving in sign Cancer for a long duration and particularly between 1st January and 11th March at the time of retrograde Mars. She may remain under immense strain during 2010 and 2011. So, despite having remarkable majority she may not be able to remain in power for too long and may not be able to complete her term this time.