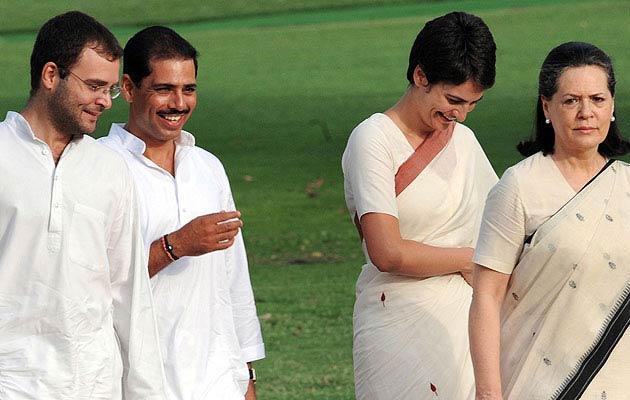 The ever elusive Gandhi-Nehru family daughter, Priyanka Gandhi Vadra is quite a popular face in the Indian Political Arena. Being the daughter of Rajiv Gandhi- the former Indian Prime Minister and Mrs. Sonia Gandhi- the current President of the Indian National Congress, Priyanka has always enjoyed ready attention and limelight. Priyanka Gandhi Vadra is also the wife of the Delhi businessman Robert Vadra and is the sister of the Amethi MP and ruling Congress Vice-President, Rahul Gandhi. Though not entirely involved in active politics, Priyanka has often campaigned and conducted rallies in the constituencies of her mother and brother in Rae Bareilly and Amethi, respectively. However, currently, troubles seem to be enveloping Priyanka and her husband Robert, as the State Information Commissions of Himachal Pradesh and Haryana have ordered probes into the land deals involving the couple. Some RTI activist has also filed an RTI plea requesting the details of the properties held by the mother of two, Priyanka in Shimla.

Is this the beginning of the unfolding of a major drama? Robert Vadra himself has been under considerable media and public scrutiny for these unfair land holdings and other such matters, since past few years, but this is virtually first time when Priyanka’s name too has been dragged into these matters. What is causing this? Ganesha first looks at the Solar Horoscope of Priyanka Gandhi, and then at Robert Vadra’s to predict the way ahead for the affluent and influential couple.

1) What do the stars indicate about Priyanka?

2) How will the upcoming time be for Priyanka? Will things become too messy?

Ganesha notes that the matter may  turn out to be a little bit in favor of Priyanka, post 1st August 2015 when the Jupiter will be in the Leo sign which will be aspecting the Lord of the 11th House Venus as well as the Planets posited in the 1st House, namely Jupiter, Sun and Mercury. Besides this, the transit of Saturn will be in direct motion in the chart. As such the impact or the speed of the processing of the matter may slow  down and she may get some breathing space to prove defend herself in the issue, if at all she is in the right. Here, the aspect of Jupiter on the  natal swagruhi Jupiter, who happens to be the Lord of the 4th House(Land related matters) who is placed in the Ascendant of the Surya Kundli or the Solar Chart, may give much support to shield her and she may get an opportunity to defend herself well.

3) Will Priyanka have to face legal action and what will be the future situation?

Ganesha indicates that there are major chances of facing legal action till January 2016 as Ketu is transiting over the Natal Mars through the 4th House and simultaneously Rahu through the 10th House, and they both are forming a square aspect with the Sun, (the significator of politics, impartiality and position), as well as Mercury- the Lord of the 10th House (government/politics related matters). So, if she is not guilty and if she has not indulged in any improprieties, then law and order will put forth their impartial stand in the matter/verdict, and she will get the justice, but she may still have to face a period of adversity. Moreover, the Sun is the Lord of the House of Fortune, so, on many instances, Priyanka’s fortune may not favour her, till January 2016.

May the truth and justice triumph!