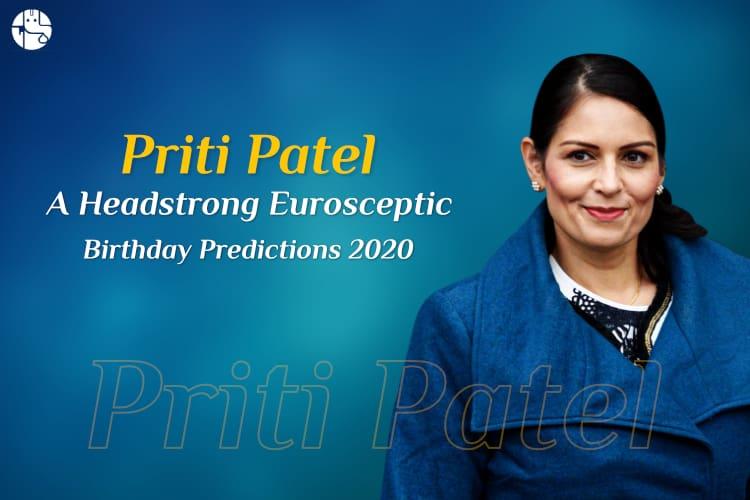 Priti Sushil Patel is an Indian origin based British politician. Born on the 29th of March,1972, Patel is a renowned face in the British cabinet. Her political controversies have made her the talk of the town on the International platform. Having started off as a teenage political intern for the Referendum Party, she switched over to John Major’s Conservative party. A postgraduate from the University of Essex and an ardent supporter of Margaret Thatcher, Priti got her inspiration from the latter who then became her ‘Political Hero. ’She believed that Margaret Thatcher had a unique ability of balancing her personal and political life.

Priti Patel started her political career with a massive win from the Essex seat in 2010. She served as the vice-chair for the Conservative Friends of Israel while being appointed as the Minister of State for Employment in 2010. She was sworn in as a Minister of State for Employment in the Department for Work and Pensions in 2015. She has also been in charge of the Secretary of State for International Development under Theresa May’s leadership from 2016 to 2017 respectively. In 2019 she became the first ethnic minority woman to hold office under Boris Johnson’s premiership.

Patel has always followed a political and social philosophy to promote traditional and social institutions in the context of culture and civilization. A supporter of equality and egalitarianism, Priti has been identified as ‘an-out-and-out right-winger’ for her staunch political stances.

She garnered media attention as she supported the restoration of capital punishment on BBC’s question time. She strongly opposed prisoner voting and Marriage Bill in England and Wales. In 2018, she contested against the use of the abbreviation  MBE which meant Black and Minority Ethnic. Meanwhile, she was asked to resign from Theresa May’s cabinet on charges of having undisclosed meetings with Israeli officials. While being Home Secretary in the Boris Johnson cabinet in 2019, she was charged with accusations of breaking ministerial code. Early this year, a report claimed her approach of tackling youth radicalisation  as ’madness’. Recently, she made headlines by accusations of racial discrimination by a senior police watchdog over remuneration claims.

Thus, Priti Patel’s embattled political graph has been oscillating from one controversy to another. How will she overcome these controversies in 2020? Does her birth horoscope show her getting away from political setbacks in 2020? Let’s know Ganesha’s revelations for her 2020 horoscope!

Will your career move on without jerks in 2020? Buy the Business Ask a Question Report and get quick answers to your queries!

In Priti’s Surya Kundli we can see Jupiter, the planet of learning placed in the self house or the Ascendant house with a rising Pisces sign.Jupiter or ‘Brahaspati’ as known in Vedic astrology, is the biggest significator of wisdom.And Priti’s chart shows a well placed Jupiter that makes her an erudite, brainy and a contemplative individual. She is well-read polymath with a contemporary approach. She has excellent commanding skills which makes her a distinguished orator. With the placement of Venus, Mars and Saturn in the 3rd house she fearlessly dominates her own ideology. She is bitterly blunt in putting up her opinions which makes her obscure at times. Her sharp-witted and frank nature has often made her an object of criticism and controversy.But, at the same time due to the placement of some auspicious planetary influences, she has been able to survive political altercations with her opposition parties.

Her upcoming 48th birthday may bless her with enormous success as Jupiter will be passing through her natal chart during this period. This indicates that in spite, of highs and lows and scepticism from opponents  her political graph may soar to greater heights. With the inauspicious effect of Saturn Panoti in her chart she had to face a crucial period with a litany of controversies to her discredit. The period may also gradually subside litigation cases against her

However, her  financial front may experience a crunch with Saturn transiting through the 11th house of gains with the natal Rahu. She may need to keep restraint in all her financial transactions.It may prove to be a time testing period for her as challenges may be on the rise.

The transiting Saturn does not favour Priti’s health aspect as well.It indicates a boost in her immunity levels as she may get prone to some ailments during this period. Therefore,Ganesha advises her to take precautionary measures to safeguard her health.

On a concluding note, Priti Patel’s birth chart shows 2020 to be a satisfactorily good one for her. There may be positive vibes with things falling easily in place. But, still, as a preventive step she may have to get practical and adopt a diplomatic approach to get away from unwanted controversial situations. In short, a progressive year with much to learn from past circumstances! Get to know what 2020 has in store for you with your Free Personalized Janampatri!