The stage seems to be set for the comeback of the LDF, while UDF’s fortunes may drastically decline

The stage seems to be set for the comeback of the LDF, while UDF’s fortunes may drastically decline 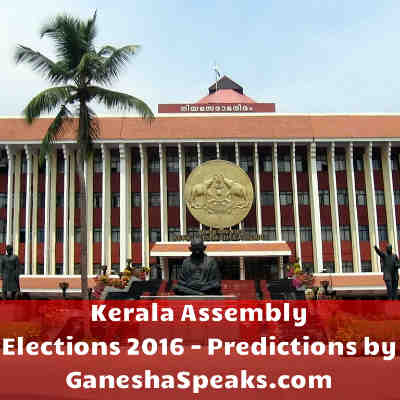 Kerala Assembly Election voting to the 140 member assembly will be held on 16 May, 2016.

Let’s check out the prediction for the upcoming battles in 2016.

LDF
The transiting Jupiter will be favourable for the Left Front during this election. It will definitely help the communist party to bring back its lost glory. However, the transiting Saturn in Scorpio with Mars will be the major roadblock for the party. So, though there will be a rise in their share of votes during this election, the Left Front may not be able to achieve expected results.
UDF
The Jupiter passing across Leo in conjunction with the Rahu will create troubles for the Congress led UDF. However, the transiting Jupiter will be aspecting the natal Sun which may help them to an extent. Though due to adverse planetary influences there will be a marginal decline in their  share of votes which may become very crucial for the seat tally, they will be able to retain their traditional supports.
Conclusion
On the polling date, the transiting Moon will be   passing across Leo in Uttaraphalguni Nakshatra with Rahu and Jupiter. So, the voting pattern during this election may get changed and it will  create a significant impact on winning prospects of both the fronts.
On the counting date, the transiting Moon will be passing across Libra in Chitra Nakshatra which indicates a very tough competition between the rivals. Since the ruling UDF will be struggling to retain its seats and power, there will be a decline in its share of votes even though LDF’s total share of votes is likely to rise. However, there will be a bit disappointment as the rise may not be as per their expectation. BJP may perfom well on some aspects but the winning prospects are not strong enough. The co-existance of Moon and Jupiter with Rahu on the voting date indicates minority voters will play a crucial role and it will be a deciding factor in this election.

The election process may get affected by sporadic incidents of violence and clashes between the rival political groups. However, the election commission and security agencies will succeed in controlling the violent and notorious elements efficiently.