Jagan’s path ahead may be filled up of hurdles, but he shall not back out, says Ganesha! 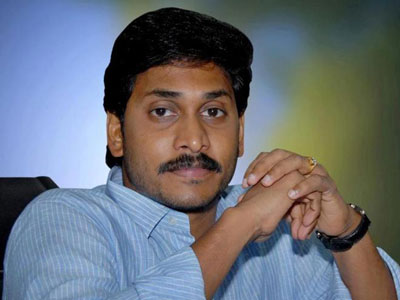 On the warpath against the ruling TDP to get special status for Andhra Pradesh, as promised during the bifurcation of the state last year, YS Jaganmohan Reddy, son of late YSR Reddy and current president of YSR Congress and Leader of Opposition in AP assembly, has announced an indefinite fast in Guntur from September 15. A popular politician in his own right, Jagan’s political career took a new turn after the demise of his iconic father, and he formed the new party YSR Congress. As its president, Jagan later faced a by-election from the Kadapa constituency and won by a huge margin of over five lakh votes. The founder of Sakshi newspaper, and a TV channel of the same name, Jagan, who was sternly opposed to the formation of Telangana, has been embroiled in corruption and disproportionate assets cases, for which he is under scrutiny and has also has to spend time in jail. He and his family have dismissed the charges alleging political vendetta.

Ganesha here takes a peek at his future political fortunes.

The Natural Qualities….
Ganesha reads Jagan Mohan Reddy’s Solar Chart and notes that he has Sun in Sagittarius conjunct with a strong Jupiter in his Chart. This makes him a charismatic young leader, lending him the ability to hit the road, connect directly with the masses and get positive response. This planetary vibe also makes him a clear thinker, who often likes to look at the big picture.

It is apparent from his the planetary arrangements in his Chart that he also likes when others agree with his point of view. He is cut out to be expansive in his thoughts, as well as in his approach.

The Down-side
The darker side of the Sun-Jupiter conjunction makes the assertive leader argumentative and blunt, at times. Once he starts to feel hemmed in, this configuration will make him impatient and confused. He can be quite self-indulgent too, since things will tend to come quite easily to him, thanks to his strong Jupiter.

Venus-Mercury conjunction in Scorpio
This another notable planetary configuration makes Reddy charming and gracious, poetic in his self-expression, and usually very polite and convincing. He may feel more at ease working with large groups of people and enjoy public speaking. He has tremendous potential to attract people and usually get support in what he speaks because people can see that he exercises good judgment. People would believe him and feel glad to pitch in to help him get success. So, he may be able to gather tremendous public support quickly.

Mars in Libra in exchange with Venus.
Jagan Mohan Reddy has his Mars in Libra in exchange with Venus. Passive-aggressiveness is essentially a hallmark of this planetary configuration. This implies, that though Reddy will be conscious of not hurting anyone, his innate aggression shall, anyway, manifest in his actions. But, thanks to the connection of the pleasant Venus with the Martian energy, his aggression would remain under control, to some extent

The Mars energy, however, will reflect in his actions, which it does. He fights for justice and he, thus, looks to expand his horizons by making all the efforts. All these factors make him an unmistakably astute businessman turned charismatic politician.

Afflictions…
Reddy Jr. has his Natal Sun afflicted by Rahu in the Sign of Sagittarius. The negative energy generated by this combination will tend to affect his peace of mind and shall also create obstacles in his path. This planetary placement may also slow down the pace of his undertakings unexpectedly. Plus, the results of his efforts may also tend to be below expectations. Afflicted Sun may also make mar his political or public image

Additionally, Rahu’s placement in Sagittarius dilutes the positive effects of Jupiter. This may keep his path pockmarked with challenges, delays, disappointments and legal entanglements.

Moon is placed with Ketu in the Sign of Gemini. Due to this inauspicious combination, there is a likelihood of a general lack of peace and harmony in Jagan Mohan’s life. And, many times his strategies and policies may prove to be wrong, or may backfire, creating frustration and tumult.

The Current Transits
The transiting Rahu in Virgo since mid-2014 would have remained tough for Jagan Mohan Reddy. This transit may have been a major hurdle in his political career, not allowing him to get the position that he desired. And, it will further continue to block his progress.

The transiting Jupiter, though, through Leo now, and through Virgo from August 2016 will help him to consolidate his position, specifically during the year 2016. He will be spearheading movements as an opposition leader and may remain very effective as well.

Reddy’s political career will take a decisive turn in the year 2017, affirms Ganesha. However, He warns that the Jupiter-Rahu conjunction during the first half of year 2016 will remain tough for Reddy’s political career. It will have the potential to bring to fore some legal issues yet again. Reddy will, however, be able to tackle the issues efficiently and will also be able to organize his party by incorporating some important changes, indicate his stars.

The Final word…
The strong planetary combinations in Jagan Mohan Reddy’s Chart have established him as a prominent power center, allowing him to make a space for himself as the ‘Political Alternative’ in state politics. He, undoubtedly, has great potential to become a formidable mass leader.