Future of Raj Thackeray and MNS 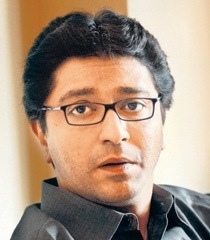 Ganesha analyses the patterns formed on the day MNS was launched and predicts the possible outcomes of the unfortunate incidences which triggered violence in the recent past.The founder and president of Maharashtra Navnirman Sena, Raj Thackeray, was born on June 14, 1968. Looking at the Surya Kundli, Ganesha finds that Mercury is occupying Mrigashira star ruled by Mars. Mercury is in close conjunction with Mars. Four planets are in the star of Mrigashira ruled by Mars which signifies energy, rashness and ruthlessness in his actions. The association of retrograde Mercury with Mars signifies unconventional thinking and also signifies that he uses his intelligence for forceful and rebellious activities.

In Navamsha chart, Sun is with debilitated Venus. This indicates his propensity for dissatisfaction, unhappiness and possible episodes of disputes with the family of Bal Thackeray.

Ganesha notes transit Saturn in Leo responsible for his recent activities which led the judiciary to take stern steps against him. Considering present planetary positions, it can be said that Raj Thackeray is unlikely to give up his political activities and will mold himself to be a successor to Bal Thackeray. He will utilize all possible methods to endear the people of Maharashtra and in future will play a very significant role in the Governance of the State.

Raj Thackeray launched the Maharashtra Navrirman Sena(MNS) on March 09, 2006. The foundation chart has fiery Leo Ascendant and the Ascendant Lord Sun is aspecting the Ascendant along with Mars.

Such planetary configuration shows hardcore and aggressive policies adopted by the party. Mars is Vargottama placed in the 10th house, which makes the chart very strong. It also manifests the attacking and fiery attitude of the party leaders. Mercury and Jupiter both are retrograde which shows the controversial regionalism and religious fundamentalist ideology of the party. Jupiter trine Sun and Jupiter trine Moon also makes the chart significantly strong. The Sun-Uranus square Mars shows the controversial and unpredictable nature of the party.

MNS is currently passing through Jupiter-Venus period. Venus, the Lord of the 10th house, is placed in the 6th house and is exalted in the Navmansa chart, which has helped MNS to catch media’s attention. But, transiting Saturn is moving in the Ascendant in opposition with natal Sun and in square with Mars which can cause many problems and may put immense pressure on the party and its leaders. The party leaders may continue to give fiery speeches despite facing opposition from the mainstream parties and public figures and may also try to gain publicity through controversial policies. The party may get momentum in the year 2009 and its popularity may rise from December 2009. MNS’ presence will be more prominent in the year 2010 and in the year 2012 they may be in the situation to dictate terms in Maharastra politics.