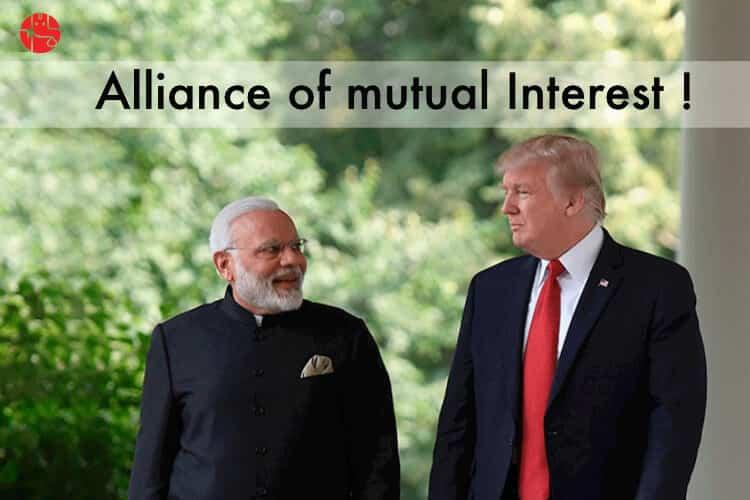 The Emerging World Scenario And The Rise Of US-India Alliance

The world is standing at a very decisive juncture today. The supremacy of the United States of America (USA), the premier country of the world is being challenged by a fast-rising China and a gradually emerging India. Well, in the present international scenario, it is the right choice of partners, which can do wonders for any nation not just in being safe & secure but also in boosting the growth and development of the respective nation. USA and India are coming out as effective alliance partners in the evolving global situation.

Indeed, the USA, the world’s oldest democracy and India, the world’s largest (most populous) democracy are natural allies. Both share a strong commitment towards democracy and pluralism and the fervent need to fight the anti-human global terrorism. Also, both the US and India want to contain the aggression of China, a country which is ruled and governed by the Communist party dictatorship. Besides, the rise of Donald Trump in the US and Narendra Modi in India is seen to share some resemblance as both the leaders are believers in a more active nationalism. PM Modi had created waves when he visited the US in September 2019 and was accorded a warm welcome in the Howdy Modi event. Now, Prez Trump is going to visit India on February 24 and February 25, 2020 and India is keenly awaiting his arrival for the Namaste Trump and Kem Chho Trump events.

Trump’s Visit: Implications For India, USA, As Per Astrology

India is currently under the influence of the Moon-Saturn Mahadasha period. Saturn is in conjunction with four planets in the 3rd house and is placed in the star of Mercury, the owner of the 2nd house.

Both Countries Passing Through  A Very Decisive Phase

As per the stars, both the countries are passing through a decisive phase. Consequently, both will face demanding situations. During Donald Trump’s visit to India, his focus will be on trade and financial & economic partnership. Both the US and India will need to adjust with each other to boost the economic agenda.  This may go a long way in strengthening the US-India partnership.

Will your career prospects strengthen in 2020? Avail the 2020 Career Report and get the answer.

A New Foundation Of Progress Likely To Be Laid

On February 24th, the transiting Moon will be in Satatara Nakshatra and in conjunction with retrograde Mercury.  Thus, it is likely that some innovative ideas and policies will get initiated during this phase. However, its implementation later may face some roadblocks. But surely, it will lay a new foundation of progress in India-US Trade Relationship.

Retrograde Mercury May Hold Back Some Important Agreements

Besides, on February 25th,  the transiting Moon will be in Purvabhadra Nakshatra and in conjunction with exalted Venus. This position indicates strong positive vibes, it is likely that progressive forces will work much more effectively. India’s negotiations with the USA will make encouraging progress. However, the movement of retrograde Mercury will not be supportive. A few important deals may not happen due to some or the other constraint.

The Jupiter-Mars-Ketu conjunction in the fiery sign Sagittarius indicates that President Trump’s visit is likely to bring some encouraging results and deals in the areas of energy, education, agriculture, health, science and technology, environment, defence and counter-terrorism.

Do you want a financial boost that can help you in various areas of life? Buy the Wealth Ask a Question Report.

India And US May Come Closer Than Ever

Well, the placement of Saturn in Capricorn may make significant changes in foreign policy. The US-India relationship is likely to get even better and stronger. It is likely that India may come closer to the US like never before. While Trump may not say anything on the Kashmir issue directly,  the increased bonding between the USA and India will speak for itself.