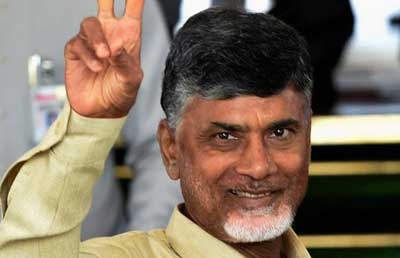 The President of the Telugu Desam Party in Andhra Pradesh and Telangana, Chandrababu Naidu is the current Chief Minister of Andhra Pradesh. He served the longest term as Chief Minister of the undivided state from 1995 to 2004. As the Chief Minister, Naidu rolled out a series of reforms, emphasising the use of information technology (IT) and was instrumental in making Hyderabad one of the IT hubs in India, which earned him kudos from global leaders and global media. He lost the 2004 elections, as he was perceived as not giving enough importance to agriculture, even during droughts, which drove many farmers with huge debts, leading them to suicide. However, he won the 2014 assembly elections comfortably, and was re-elected as the Chief Minister of the Southern state. What lies ahead for him? Reveals Ganesha….

In Chandrababu Naidu’s Chart, the Sun is in Aries sign at less than 10 degrees. It is exalted and very strong in this position. Sun represents soul, will power, administration and leadership. Thus, this strong placement of Sun in Naidu’s Chart indicates that he is a person with great leadership quality. This also implies that Naidu gives great importance to discipline and good governance. This has been evident in the fact that even after multiple set backs, he always has managed to keep his motivation high, and has tried for something new with renewed determination.

Incidentally, Moon too is exalted in Naidu’s Chart. This implies that he has an inherent capacity to magically attract exactly what he needs. He also has a strong mass appeal. He may prefer to know the ground upon which he stands and takes decisions, based on the detailed study of the problems.

On the other hand, Sun’s strong positioning in Naidu’s Chart is liable to make him develop strong ego, making him headstrong and rather domineering. He may be seen as someone by his clout, who expects everyone to work as per his priorities and goals.

Further, Ganesha reads that Naidu has Venus and Jupiter in conjunction in his Chart, which bestows him with popularity, intelligence, richness of thought and knowledge. This planetary aspect is a strong indication of a person who possesses a lot of value in life.

Jupiter’s influence will make Naidu believe in the bigger picture of life. Further, Jupiter’s connection with Venus leads to expansion of creativity and artistic talent. As the Jupiter- Venus conjunction in Naidu’s Chart falls in the 10th House from his Natal Moon, a strong Rajayoga also gets formed. This indicates independent thinking and strong leadership and enterprising quality. This combination also makes Naidu a visionary leader, with special tilt towards modern technology.

Due to this powerful Yoga itself, Chandrababu Naidi occupies a leadership position with great power, at a high pedestal, in politics, affirms Ganesha.

However, the retrograde Saturn in the 4th House from his Natal Moon also indicates a difficult journey and setbacks, on various occasions on life.

Astrologically, Mars is associated with the element Fire, whereas Ketu is ironically the signifier of lust and longing as well as detachment. When these two planets are in conjunction, they generate palpable energy, which is most likely to produce negative results. Due to this combination itself, Chandrababu Naidu’s political career has seen some very tough times and hardships. This planetary bond also indicates stiff resistance and powerful competitors.

Currently, the transiting Saturn is passing through the 8th House from Naidu’s Natal Sun, which may remain difficult for him till January 2017.

So, he will be facing problems in arranging huge funds required for the implementation of his pre-election promises. He will also face problems due to result of bifurcation of resources of the United Andhra Pradesh.

It could be a very complex political, administrative and financial environment, particularly when the transiting Jupiter will be passing through the Leo sign with Rahu, from February 2016 onwards.

Transiting Jupiter-Rahu combination in Leo will compound and complicate the challenges for Naidu. It will be a huge challenges of him to handle the deficit and liabilities on the fiscal front. Despite his sincere efforts to maintain his government’s image clean, some or the other issues may dent the image.

Dealing with the agricultural sector will remain a tough challenge for Naidu, in the times to come.

However, currently the transiting Jupiter is moving in his favour (till January 2016), which indicates that despite all the hurdles and problems, Naidu’s efforts will largely be appreciated. There will be big boost in the State’s infrastructure and power sector. Also, he will be able to attract foreign direct investments to his state and may also bring technological improvement in his governance.

On the whole, the time ahead will be a period of progress for Chandrababu Naidu, but troubles may increase in the year 2016.