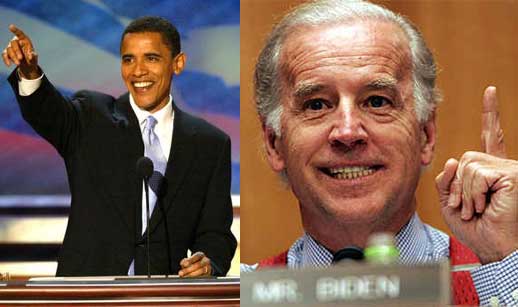 Introduction: Barack Obama selected Senator Joe Biden of Delaware to be his running mate. The older congressional veteran, holding great cognizance about foreign policy and defense issues, will fill out the Democratic ticket. Joe Biden may be more valuable to Barack Obama as a senior adviser in the White House.

Joe Biden’s Sun sign is Scorpio with Moon in Aries. So, he must be a man with a strong drive and is determined to do what he feels right. Mars becomes important in his chart due to exchange with Venus. Uranus on the Descendant indicates that he may be a person who wants to make changes in the system, the way Obama did. Mercury is the Atmakaraka in his chart and Mars conjunct Mercury indicating that he is having strong opinions and his own ideology. The Saturn of Obama’s chart is in opposition of Jupiter of Joe Biden’s chart. The Moon of Obama is conjunct, Saturn-Uranus of Biden’s chart and Venus of Obama’s chart squares Neptune of Biden’s chart. Sun of Biden’s chart is in square with Rahu of Obama’s chart. The matching of sun signs, moon signs and Mercury looks adverse. So, they both are very much different and may not have excellent rapport. The convictions and ambitions of Biden might be in contrast with the views and plans of Obama and Obama may restrict Biden’s progress to a certain extent. The Captain and the Coach sometimes might have very different point of views. Obama may deliberately try to avoid advises of Biden and that might create conflicts between them. So, Barack Obama and Joe Biden may not have a great inter personal relationship. It would be like President Clinton and Al Gore who had major differences of approach and opinion. It’ll be interesting to see how they work together in White House. Biden is definitely not like Dick Cheney but he is also not the person who likes to sit on the sidelines and wait for his turn.Ganesha’s GraceTanmay K.ThakarThe GaneshaSpeaks Team