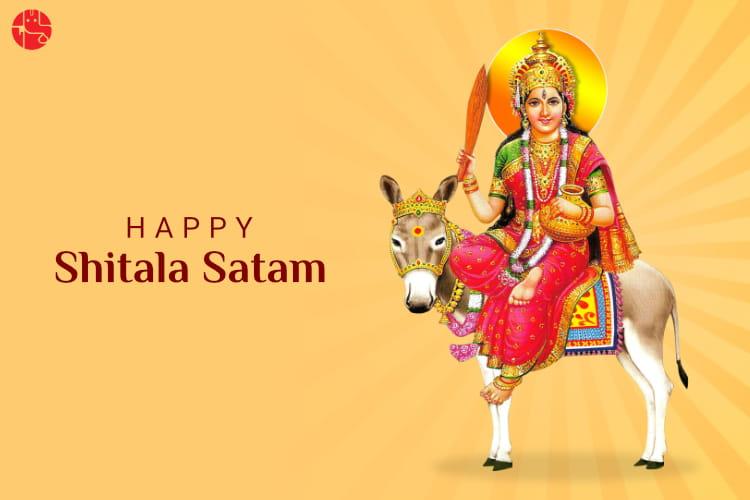 Shitala Satam festival is celebrated on the 7th day of the Shravan month, i.e., the day before Krishna Janmashtami, and a day after Randhan Chhath. It is also referred to as Shitla Saptami or Sheetala Satam. The benefits of worshipping Mata Sheetala have been explained in the Skanda Puranam that consists of the Shitala Mata Strotra, also known as ‘Sheetalaashtak’ written by Lord Shiva.

Shitala Satam is observed in honor of Goddess Shitala, who is known to be the Goddess of measles and pox. It is celebrated to receive protection against smallpox or similar diseases. This is a significant day for the people of India, especially Gujaratis.

Known to be an incarnation of Goddess Durga, Shitala Devi is highly regarded and worshipped as a form of Shakti in Hinduism. Goddess Sheetala is said to be a natural healer, and in Sanskrit, the name Sheetala truly means one who cools. The Goddess is worshiped by several names in different parts of India. Many Hindus, Buddhists, and tribal communities worship her, and address her with the words Ma and Mata (mother).

Shitala Mata is mainly popular across North Indian states. She is also revered and viewed as the Goddess Parvati, the wife of Lord Shiva. While, in South India, Goddess incarnated as Mariamman is believed to have taken Shitala Mata’s role and is worshiped by the Dravidians.

The ceremonial tradition of Shitala Satam is similarly followed as Basoda and Sheetala Ashtami that are celebrated after Holi in North India. The most important ritual of Shitala Satam is to avoid cooking food on that day. Family members must not consume fresh food, and hence, on the day of Randhan Chhath just before Sheetala Satam, most Gujaratis prepare food in abundance. This food is sufficient enough to be taken the next day, i.e., the day of Shitala Satam. Below are the rituals to be followed on this day:

There are many legendary stories related to the Shitala Satam festival. The most relevant one mentions a noble and righteous king named Indrayumna. He had a wife named Pramila, and a daughter Shubhakari, who had a husband named Prince Gunvan. Everyone in the kingdom used to celebrate Sheetala Satam and observe fasting with utter devoutness. Shubhakari had once visited her father’s royal province to attend the grand festival and observe the fast as part of the custom.

Shubhakari went out with a few friends to visit a lake to perform the rituals. However, they lost their way and sought help from anyone who could pass by. They were guided with the correct path to the lake by an old lady who also assisted them in conducting the puja followed by fasting rituals. Shitala Mata was impressed with their puja procedure and hence gave a boon to Shubhakari. However, Shubhakari told the goddess that she would only use that boon when she would be in real need.

On their way back to the kingdom, Shubhakari and her friends came across a poor Brahmin family. The family members were in deep sorrow because one of their family members had died due to a snake bite. This sight was irresistible for Shubhakari, and so she prayed to Shitla Mata for her boon to be used for bringing the dead Brahmin to life. The Goddess granted life to the Brahmin after the prayer. This incident went deep within all the people’s hearts, and they understood the meaning and significance of celebrating the Shitla Satam festival. From then everyone started performing Shitla Mata puja vidhi and observing Vrat with true devotion and piousness.