What are the special Puja and Prasad offerings for Navdurga? 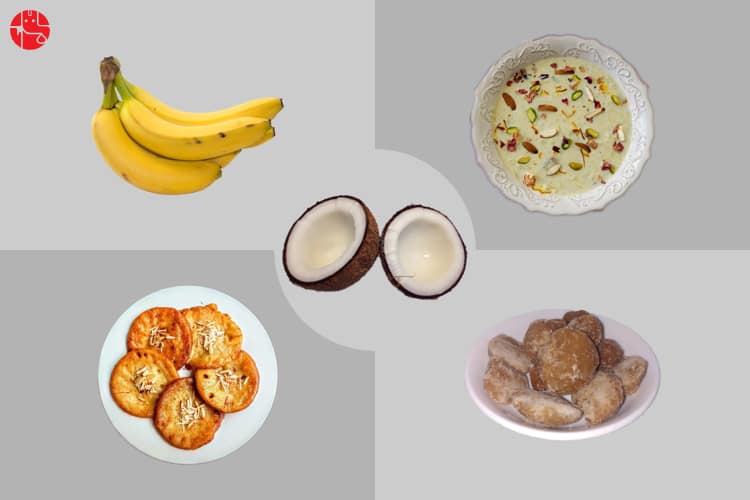 Navratri is a nine-day festival signifying nine different forms of Goddess Shakti – Durga. The nine forms of Durga widely known as Navdurga are worshipped during this festival. Navratri Puja offerings and prasad hold prime importance in Hindu culture. The devotees of the Goddess observe fast for nine days and according to Hindu culture, the Navratri fast is said to be complete only after offering Navratri Puja and Mahaprasad to Navdurga.

Goddess Chandraghanta, the third form of Goddess Durga is to be worshipped on Tritiya Tithi. The name of the Goddess is Chandraghanta as half form of Moon exists on her head. The devotees have to observe fast and offer milk or sweets made from milk as Navratri Prasad to the Goddess. The Goddess blesses the devotees with joy and happiness and helps ward off the worldly pains.

On the sixth day or Shashthi Tithi, Goddess Katyayani is to be worshipped. Sage Katyayan is the father of Goddess Katyayani. Goddess Parvati was pleased with the meditation of the sage. So she took birth as his daughter. She is called Katyayani being the daughter of Sage Katyayan. The devotees are likely to become more attractive by offering honey as prasad to the Goddess and observe fast on that day.

On Saptami Tithi, the seventh form of Goddess Durga, Goddess Kaalratri is to be worshipped. According to Hindu Mythology, Goddess Shakti removes all the evil powers existing in the world and hence is called Kaalratri. The prasad of Jaggery has to be offered to the Goddess and the devotees have to observe fast. The prasad must be given to a Brahmin along with Dakshina. By practicing this, the devotees get relieved from all the pains of the world and also reduce the frequency of sudden pain.

The eighth form of Goddess Durga, Goddess Mahagauri is to be worshipped on Ashtami Tithi. She is called Mahagauri because of her fair complexion. The prasad of coconut is to be offered to her. Observing fast on that day would please the Goddess and she would bless you with success in all areas of work. The Goddess fulfills the wishes of a woman for having a child who is longing to be a mother for a long time.

Goddess Siddhidatri, the ninth form of Goddess Durga is to be worshipped on Navami Tithi. The Goddess fulfills all the wishes of the devotees so the name of Goddess is Siddhidatri (Siddhi means accomplishment). The prasad of til or sesame seeds have to be offered to the Goddess and fast has to be observed by the devotees on that day. The Goddess relieves the devotees from the phobia of death and prevents them from accidents.

The nine days of Navratri are considered as the most auspicious days of the year. Chaitra and Shardiya Navratri are very auspicious and hold great spiritual importance in Hindu culture.

So Navdurga is considered to be the most powerful Goddess and worshipping her fulfills the wishes of the devotees. They are blessed with a healthy and wealthy life. The devotees are advised to bring home Saraswati Yantra during Navratri which would likely aid them in taking a smarter decision in different areas of life.