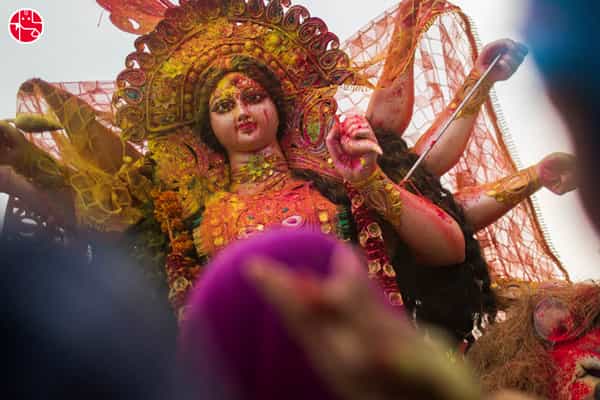 With the cool winds of autumn and the lush green sugarcane coming straight out of the fields, you can be sure that the long wait is over! That time of the year is here when we can revel in the spirit of the jubilant Durga Puja or Durgotsav! This grand Hindu festival, which is celebrated with pompous by Bengalis across the world, is a five-day extravaganza of festivities, which is celebrated in honor of the powerful Goddess. Durgotsav signs the triumph of good over evil.

Mahalaya occurs on the new moon day of the month of Ashwin and it signs the beginning of the most awaited festival for Bengalis – Durga Puja. The Earth is the paternal home of Goddess Durga and she descends here on Durga Puja every year.

Though festival rituals begin with Mahalaya, the main festivity begins on Maha-shashti and Maha-ashtami is considered as the most significant one.

In this article, we bring to you a lowdown of the process of celebration and the specialties of each of these five days. Belief in God helps us succeed in different areas of life including career. At the same time, taking the help of Expert Astrologer can make a positive difference as they offer us a direction.

Durga Puja Vidhi is done by placing Goddess Durga with Goddess Lakshmi, Goddess Saraswati, Lord Ganesha, and Lord Kartikeya. Goddess Durga is considered as a mother, and other deities are her children.

Lord Shiva, the husband of Goddess Durga, is also placed besides Goddess Durga. The festival begins as Goddess Durga origins the battle against ego and evil to protect dharma and endeavor peace. The first day is called Mahalaya Durga Puja. On the sixth day, the Goddess is welcomed in houses, in pandals and temples.

Goddess Lakshmi and Goddess Saraswati are respected on the seventh and eighth days, respectively. On the tenth day, the statue of Goddess Durga is emerged in the river along with a musical and colorful procession. The tenth day is called Vijayadashmi.

The sixth day of Devi Paksha marks the auspicious beginning of Durga Puja in Bengal. On the ‘Bodhon’ or first day, Goddess Durga is welcomed on earth along with her family.

On the early morning of Maha Saptami, Goddess Durga is worshiped with nine different plants, known as Nabapatrika. During the Durga Puja celebration, these plants fundamentally represent the nine different incarnations of Shakti. The idol is bathed in the Ganges, followed by the chanting of mantras. We can get all the boons by worshipping Gods. Astrology is a bridge to the divine that helps us get our wishes granted.

This day is the most sacred day of Durga Puja as Maa Durga is believed to enter and awaken the idol when priests perform rituals through the chanting of religious mantras. The devotees start the morning with Pushpanjali. They take a holy bath and observe fast before offering Pushpanjali. With fresh flowers in hand, they recite the mantra, offer flowers to the feet of the Goddess.

The main attraction of the day is Kumari Puja. If you want to see the auspicious awakening of Goddess Durga, you have to visit the Belur Math in West Bengal where a young teenage girl is worshiped by the devotees as the incarnation of Maa Durga.

Evening Aarti is performed with diyas, candles, and incense sticks. In the evening, Sandhi puja is performed at the end of Durga Ashtami and the beginning of Maha Navami. Sandhi Puja is one of the most important rituals during Durga Puja and is considered highly sacred.

‘Maha Aarti’ brings the formal end to religious customs. Cultural festivals and celebrations like music, dance, drama enthrall the audience throughout the night. On Maha Navami, the fast is ended by a major Bhog and Prasad is offered to Goddess Durga and shared amongst devotees.

Vijaya Dashami, also known as Dussehra is celebrated in honor of the victory of Lord Rama over the Demon Ravana and also the triumph of Goddess Durga over the powerful buffalo demon Mahishasura. This day is celebrated with the burning of Ravan’s idol and firecrackers across India.

In Bengal, Goddess Durga bids adieu with Her family. Devotees join hands with dhakis in the precision and the idols are immersed in the water in the evening. Devotees share sweets with each other and celebrate by dancing. The evening is enriched by various cultural programs like art, drama, dance, and music.

a) By worshipping the first three days to Goddess Durga the vices and impurities within us get destroyed.

b) By worshipping Goddess Lakshmi on the fourth, fifth and sixth-day spiritual wealth and prosperity remain in the house.

c) By worshipping Goddess Saraswati on the seventh, eighth and ninth day gives success and wisdom in life.