‘Make in India’ and other such development plans may be slow to catch momentum, but will be steady and firm, foresees Ganesha. 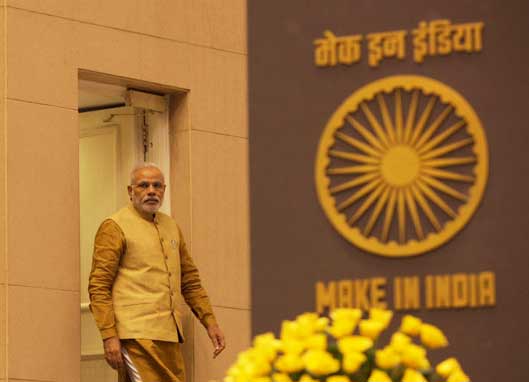 In his recent outing, India’s Prime Minister Shri Narendrabhai Modi announced of his new mission of for India – Make in India. The PM’s clarion call to attract investors and FDI to India aims at not only providing them with a cost-effective manufacturing scenario but also a huge, ready made consumption market for their goods. And ‘Make in India’ already seems to be making waves, hitting the right target audience. And, since this comes just near to Mr. Modi’s visit to the United States, there is even more to read into. Have we finally started rolling on to our path to real development and economic stability? What lies ahead for India in the coming times? Ganesha predicts here –

While predicting about India’s growth story, more than a couple of years ago, Ganesha had said that Jupiter and its mighty influence shall play a vital role in India’s growth and development in the coming times. With Jupiter’s entry into its Sign of exaltation – Cancer – the results started showing. In a true display of democracy, India selected a very unconventional Prime Minister in Shri Narendrabhai Modi.

Jupiter began its transit through Cancer from July 2014, and while it has been in Cancer, India has witnessed relatively good times. Inflation recently hit a 5 year low, and now India has forged business and trade deals with economies like China, Japan and now U.S.A.

India also very recently succeeded in reaching Mars. With its Mangalyaan finally reaching Mars, India has become the first and only country till date to have achieved such a feat.

Now, Ganesha sees that in India’s Natal Chart itself (created for the date of 15th August 1947), Jupiter has been transiting in the Moon Sign Cancer degreecally over planets like Mercury, Moon, Saturn, Venus and Sun. This is a good indication, and will be fruitful for India’s development and relations with powerful countries.

However, note that Saturn shall start transiting through the Zodiac Sign Scorpio from 2nd November 2014 onwards. This planetary move may slow down the developmental efforts to some degree. Nonetheless, by then Jupiter would have done (it has already done to some extent) its work of laying a firm foundation for future growth.

Thus, Ganesha wishes to affirm that it is not the case that all the efforts by the Modi team shall bear 100% results in very short time, given Saturn’s slow yet fair and disciplinarian influence. But, there definitely will be slow yet concrete growth and development, under Saturn’s influence.

Also, Ganesha foresees a very good growth in the agricultural sector, post 14/07/2015, when Jupiter leaves Cancer to move to the Zodiac Sign Leo.

Ganesha wishes best for India as well as the whole world.