Bill Gates to go thru more gates of success 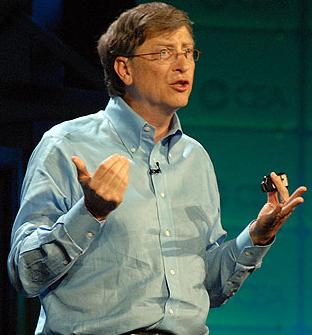 A computer on every desk and Microsoft software on every computer. This is the dream of software king Bill Gates, Chairman of Microsoft. Seeds of software were sown in his mind at the tender age of 13, when he developed interest for programming computers. Slowly and gradually his interest turned into passion and today the king of software is the chairman of US $51.12 billion company. Bill Gates is now 52 and Ganesha speaks on this computer heavyweight.Bill Gates was born 28th October 1955 with rising Gemini Ascendant. The Lord of Ascendant is exalted in the fourth house. Hence his Luck is powerful. There are many types of powerful combination in his chart. The Lord of ninth house of father and good fortune Saturn is exalted in the fifth house of mind and investments. This provided him with support and protection from his father.Ganesha notes that in his chart Mercury is well placed in fourth house. This situation is forming Bhadrayoga which is favourable regarding mother, home life, education, fixed assets, and mental peace. Mars, The Lord of eleventh house of benefit and desire fulfillment, is posited in the fourth house and it is aspecting the Moon (Moon denotes progress) which is the Lord of second house of income. This denotes good status, great success, and fulfillment of desires, widespread fixed assets, and property success.The Lord of fifth house Venus is posited in the fifth house hence he is close with good intelligence, deeper involvements, persistent nature, risk-bearing capacity, speculative acumen, children, and wealth through investments. The Placement of Jupiter in third house and it aspects on seventh house; this indicates beautiful, intelligent and hardworking wife who contributes to his good fortune. There are degree to degree and powerful conjunction between fifth Lord Venus and Ninth Lord Saturn to make him a creative thinker, gives him ability to accomplish the entire project.Moreover powerful Mercury, which is the significator of communication and Mars signify electronics field. Hence he is in electronics as well as communication field. The powerful planetary position has been giving success to him. He will reap more financial gains in next year. Currently he is under the influence of major period of Sun which is debilitated but due to exaltation of Venus in same sign Libra, Nichbhang Rajyoga is forming. This combination is good for health as well as wealth also. This period of Sun can bring some gains from new initiatives, long term investments. It indicates benefit and different kind of advantages from his father as well as government. Business will spread out by leaps and bounds. From 2009 to 2019, he will be under the powerful and favourable major period of Moon which is forming Sasimangale yoga. Because of that he will be associated with tremendous status in life.Ganesha wishes him all the success and glory this birthday! May he continue receiving name and fame!Ganesha’s Grace,Nikunj Suthar,The Ganeshaspeaks Team